Is your smartphone in you back pocket? If so, your testicles and their sperm are very close indeed to this powerful source of electromagnetic radiation.

“OK. This radiation passing between my smartphone and the local cell towers and masts is designed to pass through stone, cement, wood, plastic and glass – through floors and ceilings – through outer and inner walls of houses, factories, office blocks, mosques, synagogues, cathedrals, schools and hospitals, but it is harmless to sperm.

“The radiation might have ever-increasing penetrability as the gadgets become more sophisticated and powerful but there is no way it could damage the cell structures, enzymes, and DNA in my spermatozoa. No way.”

Dare I suggest this thinking is a triumph of optimism over rationality, of foolishness over caution, of blind hope over science? Of course there is damage!

Here are some extracts from a recent Guardian article by Nicola Davis, ‘Shocking’ decline found in sperm count of western men (dated 26/7/17):

Sperm counts among men have more than halved in the past 40 years, research suggests, although scientists admit the causes of the decline remain unclear.

Between 1973 and 2011, the concentration of sperm in the ejaculate of men in western countries has fallen by an average of 1.4% a year, leading to an overall drop of just over 52%.

“The results are quite shocking,” said Hagai Levine, an epidemiologist and lead author of the study from the Hebrew University of Jerusalem.

The study, published in the journal Human Reproduction Update by an international team, drew on 185 studies between 1973 and 2011 involving almost 43,000 men. The team split the data based on whether the men were from western countries – including Australia and New Zealand as well as North America and Europe – or from elsewhere.

By contrast, no such trends were seen for men in other countries – though the authors note that far fewer studies have been carried out among such populations.

Levine agreed that research into potential causes was needed. Numerous possibilities have been offered, with research suggesting links to body weight, a lack of physical activity, smoking, and exposure of pregnant women to chemicals found in myriad household products, known as endocrine disruptors.

Of course, electromagnetic radiation is not listed as a possible cause. If this were mooted by any brave soul it would be very quickly suppressed by the telecoms industry (who need sales), governments (who needs telecoms money) and the bodies that award research grants. So the cause of this drop in male fertility, over a period coinciding with the dramatic rise of ‘electrosmog’ in the West, remains a ‘mystery’.

Some women might notice the attempt reported in the Guardian article to lay the blame for damage to men’s sperm at the feet of women who do too much housework.

Some women might take the danger to the sperm of the likely father of their next child from his smartphone very seriously and, in the spirit of wise caution, try to open a discussion with him. There is danger here: some of these women will learn the comparative value their man puts on (a) his smartphone and (b) her next pregnancy.

So, what is the science reporting damage to sperm?

The effects of radiofrequency electromagnetic radiation on sperm function

Mobile phone usage has become an integral part of our lives. However, the effects of the radiofrequency electromagnetic radiation (RF-EMR) emitted by these devices on biological systems and specifically the reproductive systems are currently under active debate. A fundamental hindrance to the current debate is that there is no clear mechanism of how such non-ionising radiation influences biological systems. Therefore, we explored the documented impacts of RF-EMR on the male reproductive system and considered any common observations that could provide insights on a potential mechanism.

Among a total of 27 studies investigating the effects of RF-EMR on the male reproductive system, negative consequences of exposure were reported in 21. Within these 21 studies, 11 of the 15 that investigated sperm motility reported significant declines, 7 of 7 that measured the production of reactive oxygen species (ROS) documented elevated levels and 4 of 5 studies that probed for DNA damage highlighted increased damage due to RF-EMR exposure. Associated with this, RF-EMR treatment reduced the antioxidant levels in 6 of 6 studies that discussed this phenomenon, whereas consequences of RF-EMR were successfully ameliorated with the supplementation of antioxidants in all 3 studies that carried out these experiments. In light of this, we envisage a two-step mechanism whereby RF-EMR is able to induce mitochondrial dysfunction leading to elevated ROS production.

A continued focus on research, which aims to shed light on the biological effects of RF-EMR, will allow us to test and assess this proposed mechanism in a variety of cell types.

For the next paper I am offering only the introduction and reference list. Please get in touch if you want the whole paper.

Data from around the world indicate that about 35% of women and 45% of men are sub-fertile (about 7% of women and men are effectively infertile) [1,2]. Though most men believe infertility is due to “female issues”, the truth is that male infertility plays a role in about 50% of cases of failing to conceive after one year.

Sperm counts in men worldwide have declined by half over the past 50 years and are continuing to fall, according to a number of studies. A 2011 Finnish study of the sperm counts of 858 young men in three birth-year cohorts from the 1970s to the 1980s concluded: “These simultaneous and rapidly occurring adverse trends suggest that the underlying causes are environmental and, as such, preventable.” The decrease could be due to environmental chemicals affecting early testicular development and/or to the increased EMF exposure from cell phones. Lifestyle factors are likely to be having a significant impact. The more recently a male was born then the lower their sperm count is likely to be when they reach 20 [3]

What affects sperm and male fertility?

It is well established that smoking and drinking, drugs (medicinal and recreational), hormone-affecting chemicals in our food and environment, and increasing testicular temperature can adversely affect sperm count.

There is also growing evidence that electromagnetic fields (EMF) from cell phones can impair male fertility. If the observed association between cell phone EMF exposure and reduced sperm counts proves to be causal, then the dramatic increase in mobile phone use, especially by young people, over the last two decades could be the major factor.

A recent (July 2011) peer-review published scientific paper over-view of the scientific literature concluded [4]: “The use of mobile phones is now widespread. A great debate is going on about the possible damage that the radiofrequency electromagnetic radiation (RF-EMR) emitted by mobile phones exerts on different organs and apparatuses. In human beings, two different experimental approaches have been followed, one has explored the effects of RF-EMR directly on spermatozoa and the other has evaluated the sperm parameters in men using or not mobile phones.

The results show that human spermatozoa exposed to RF-EMR have decreased motility, morphometric abnormalities, and increased oxidative stress, whereas men using mobile phones have decreased sperm concentration, motility (particularly the rapid progressive one), normal morphology, and viability. These abnormalities seem to be directly related with the length of mobile phone use.” 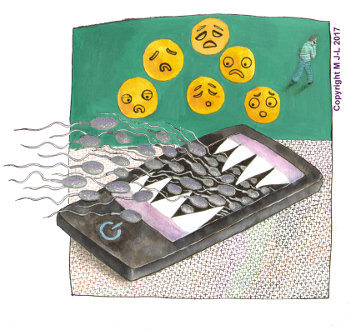