Comment by Peter Limbrick: This headline is not likely to appear in news media anytime soon. But the cartoon comes from deep frustration about the seeming impossibility of protecting children from missiles, bombs and bullets.

The men who perpetrate these acts have ready phrases to hand; ‘Our weapons have pinpoint accuracy’, ‘The enemy hide in nurseries, schools and children’s hospitals’ and ‘Some collateral damage is inevitable in war’.

Imagine your maimed or dead child being described as ‘collateral damage’.

Killing a child in a warzone is now officially a war crime. 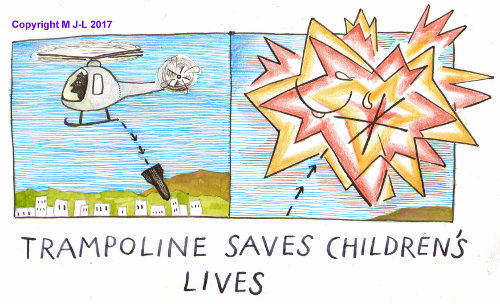 This is a short article because all the words have already been written in defence of children in war zones. The killing and maiming of innocents will continue for years to come.