Editorial: The electromagnetic radiation (EMR) used by baby alarms, smart meters, smartphones, DECT phones and wi-fi gadgets has never come with a ‘safe-for-children-in-the-long-term’ certificate. This is true for the coming 5G network that will infiltrate all aspects of our lives from conception to grave. Independent international scientists warn of serious physical and mental health dangers to children but their voices are drowned out by hype from big tech companies that need to keep their public ignorant.

Changing my tactics and knowing there is strength in numbers, I wrote in June 2018 to each of the four Children’s Commissioners (for England, Scotland, N. Ireland and Wales) hoping they would take strength from each other in some joint effort. I have never underestimated the challenge of trying to protect our children from EMR in the face of UK government’s assertion that the radiation is safe. Success will come from people working together.

These approaches were all made on the assumption that Children’s Commissioners:

In May 2018 I learned that the Northern Ireland’s Children’s Commissioner’s office had recently met with some people who were concerned about EMR dangers to children and as a result had added the issue to the agenda for the next meeting of the British Irish Network of Ombuds / Children’s Commissioners (BINOCC) for further discussion. This was indeed encouraging.

I was further encouraged to learn from the Children’s Commissioner for Wales that the next European Network of Ombudsmen for Children will be on the theme of Children’s Digital Rights and that ‘the issues you raise…will be relevant to bring to the attention of the European attendees for consideration as part of our deliberations.’ I have learned now that this meeting will be in the second half of this year (2019). I intend writing to the four Commissioners now to ask if any further information from me would be helpful and if they will invite an independent scientist to speak at the meeting.

I have never expected the Commissioners to accept my view of the EMR dangers. Rather, I have supplied links to independent research from around the world on the assumption that these papers would open doors for a wide-scale review of current research findings. The evidence is there for all who are willing to look.

I have put great faith in the Children’s Commissioners as potential children’s champions to protect them from EMR dangers. At the moment, when a child, teenager or family are worried about EMR, there is nowhere for them to turn to. The government stance is pro-radiation. NHS will not acknowledge yet that any illnesses are caused by EMR. Most schools use wi-fi and many promote pupils’ use of smartphones. I do not know of any children’s charity that has a policy for protecting children or pregnant staff members from EMR – not even the ones that loudly claim to be pro child (or pro foetus).

While I realise that taking on a fight with big tech is a massive undertaking, it seems to me the Children’s Commissioners are the only ones who can begin the process. It is not a new sort of fight. It has been rehearsed many times with asbestos, tobacco, diesel particulates and glyphosate (in Roundup)…

No one has the right to be surprised when the news breaks that big tech’s EMR is damaging foetuses, babies, children and teenagers – and their parents.

I wish UK and European Children’s Commissioners and Ombudsmen all success. May they take courage from all children who rely on them to help keep them safe and healthy. 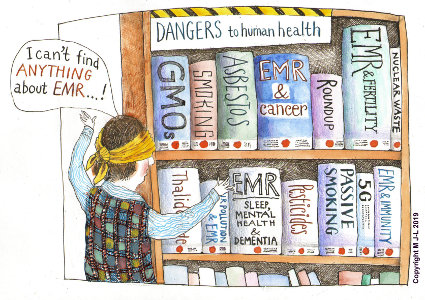